Book presentation for Χωρίς Ίχνη (No footprint) (book in Greek) by Adventure.com from George Voutyropoulos

I had the privilege of meeting Christos and accompanying him for a while in the most creative period of his life, in the late 80's. He was my mountaineering teacher with Michalis Tsoukias and Dimitris Karagiannis, at the beginner school of EOS Athens. He had survived a climb to southern Anapurna 2-3 years earlier, and had just completed one of the most difficult climbs ever made by our compatriots, at Ama Dablam, in 1987. A true mountaineering star, buzzing with vitality and tenderness, he was my teacher, who took him in his paternal arms and guided in her first steps a whole generation of Greek alpinists.

At the same time, they had just started with Tsoukias to create the legend of Trekking Hellas, the first outdoor activity company in Greece, from which I even got my first pocket money as a guide for a small, I remember, hiking in Parnitha with children. Beloved and familiar, Christos represented for us younger people the man who had achieved the ultimate, to live with Adventure. I remember that in those years we all wanted to give up our studies and the other routines of our lives and take the mountains and become like Lambris. Some even did.

Gradually the company will distract him from mountaineering with new, different challenges, such as rafting. But his iconic figure with round sophisticated glasses like John Lemon, his spontaneous smile and his determined, persistent spirit will never fade. He will remain in the field of Greek mountaineering, watching from afar what is happening, with short but always substantial interventions in various circumstances. You will also continue to thrive, traveling and adventures. However, the last, and more difficult adventure, Christos will not live in the deserts but in the bed of an ICU, hit by the coronavirus. Of course, he will survive again, but this bad experience will shake him physically and psychologically since he will lose his brother friend Michalis Tsoukias from the deadly virus.

From the bittersweet story "My whole life", to the cute "Redial", Christos reveals to us, key moments of his life and invites us, in an almost childish mood, to think about the meaning of a life at risk.

The fruit of this sad development is this book, which was written at once during his prolonged recovery. Cheerful, bitter and strange stories from a man who lived the journeys and adventure as few. With this book, Christos tries to guide us in his turbulent life through 32 excerpts of his rich action in the mountains, in the rivers, in the seas and in the deserts. Many of these stories I was lucky enough to hear from him one night in a shelter.

Yes, with such stories a whole generation of climbers grew up and it is really wonderful that Christos decided to share them with the wide dust. His speech is straightforward and straightforward, almost verbal, but the descriptions are not devoid of emotion as he presupposes. It is really difficult to write about oneself and Christos dares it with the modesty and simplicity that characterizes his whole life. The text is enriched with photos from its huge archive. Some are amazing, some are just historical. It is well known that, among other things, he was a very creative photographer and cinematographer, I am sure that this rich archive will be published at some point in the future. From the bittersweet story "My whole life", to the cute "Redial", Christos reveals to us, key moments of his life and invites us, in an almost childish mood, to reflect on the meaning of a life at risk. 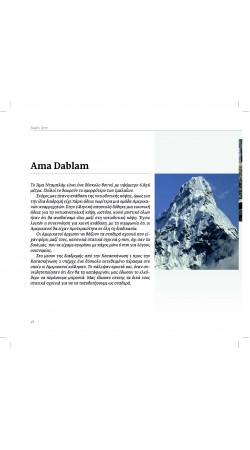 Χωρίς ίχνη (No Footprints)
“No footprints’ is the life story of an extraordinary alpinist and survivor.  The short stories take us from the Himalaya to Antarctica.     ..
22.00€
Ex Tax:22.00€
Add to Cart
Add to Wish List
Quick buy Ask about