According to legend, Poseidon fell in love with the beautiful nymph Corkyra, daughter of Asopos. He brought her to this place and gave the island her name: Korkyra, which gradually became Corfu. The fruit of their union is Faiaks, who gave his name to the inhabitants of the island: the Faiakes.

The history of the island is full of battles and sieges. The legacy of this conflict is evident through the castles one can find in the island at strategic points.

Two of these castles guard the island's capital. From the 14th to the 15th to the beginning of the 18th century, Corfu was the apple of contention between the Ottomans and the European powers and as a result became one of the best fortified places in Europe. Corfu repulsed the Ottoman sieges many times before passed into the possession of the English after the Treaty of Paris of 1814 which followed the Napoleonic Wars.

Corfu merged with Greece, with the Treaty of London in 1864.

The Byzantine castle of Angelokastro is located on a steep hillside 300 meters above sea level. It oversees the area as far south as the Adriatic. In combination with the castles Gardiki and Kassiopi, it forms a triangle that protected of the island in the southern and northwestern directions.

The castle is invincible. It has been frequently under sieges and many attempts have been made to conquer it over the centuries and has played an important role in protecting the island and pirate raids and sieges.

The monastery of Panagia in Paleokastritsa

The monastery of Panagia dominates over the village of Paleokastritsa. The monastery has a remarkable collection of Byzantine icons, holy books and other religious relics. Also, inside the monastery you will see a small traditional olive press.

The magnificent landscape is located at the southern foot of the highest peak.

From the top of Pantokratoras we have a wonderful view in all directions.

The old city of Corfu is strategically located at the entrance of the Adriatic and its foundation is estimated at the 8th century.The Venetian walls of the city testify to the intense conflicts between the Venetians and the Ottomans over sovereignty in the Mediterranean. The fortifications protected the maritime trade and the interests of La Serenissima, especially against the Ottoman Empire.

The aesthetic of the city today is a rare example of western-style architecture. Most of the city's houses date back to the Venetian period. As a stronghold of the Mediterranean, it stands out for its high degree of homogeneity and uniformity.

In the palace of the Empress of Austria-Hungary, Elizabeth, also known as Sissi, we enter in the atmosphere of another era. The most characteristic sculptural work in the palace is the "Achilles of the Dead" depicting the mythical hero to whom the palace is dedicated. In Achilles, the romantic idealism of the 19th century for ancient Greece is clearly expressed. at 8:00 to 19:00, on weekends 08:00 to 14:30

Pontikonisi and the Monastery of Vlachernon form perhaps the most characteristic image of Corfu. You can also admire them from the top of Kanonio. Pontikonisi is an island, a green rock at the entrance of the Halikiopoulos lagoon and on it a Byzantine monastery with a church of the 11th or 12th century. The monastery is open to the public only on the day of the Feast of the Transfiguration of the Savior on August 6. The Monastery of Vlachernon reminds us of the close relations of Corfu with Constantinople, where the first Vlachernon Monastery was located. The island is connected to the mainland by a pedestrian bridge on which boats and boats offer their services to visitors.

The Byzantine fortress of Gardiki with its eight strong towers ensured the defense of the southern part of the island. 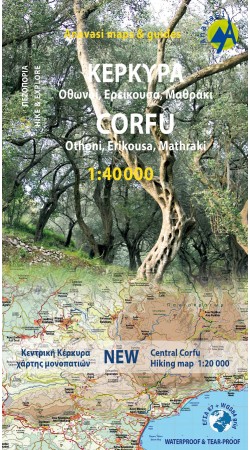 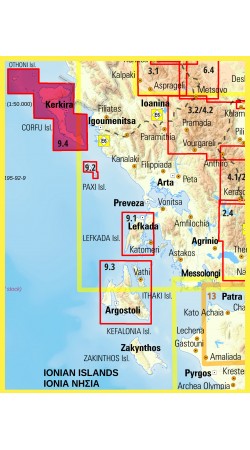 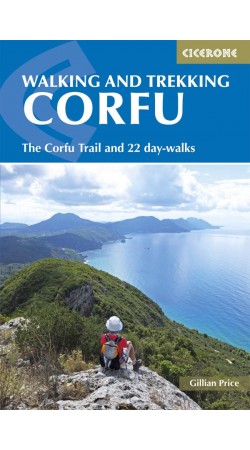 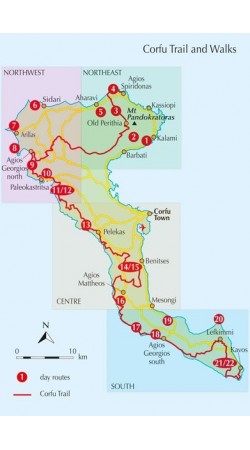 Walking and Trekking on Corfu
The Corfu Trail and 22 outstanding day-walks Guidebook to 22 day walks on the Greek island of Corfu and the Corfu Trail, a 150km route described in 1..
20.00€
Ex Tax:20.00€
Add to Cart
Add to Wish List
Quick buy Ask about