"It doesn't matter to me whether it's raining or sunny: when I'm on the bike I feel like the luckiest man in the world, as he himself confesses." The phrase is attributed to the great sprinter Mark Cavendish, but it expresses all friends of cycling, as Kostas Loukopoulos writes in the preface to the book "Epic moments of cycling". Among these very good cycling friends is the book's author Paul Bailey, a long-time English teacher at Deree, a mountaineer and rock climber in the 1980s. In fact in his introduction, cycling was for him "a matter of life or death". She supported him in his recovery. So in return, he created a book about the great professional cyclists, whose achievements and detailed bibliography at the end prove the thorough research that preceded it. Beginning with a historical retrospective, Bailey focuses on some of the most heroic moments of the sport. In the first part he introduces us to the tough one-day races, also known as "Monuments". The second mentions the main epic climbs - fear of the big rounds.

The book is a compilation of their exploits. A fascinating text on the cycling heritage of Europe. However, despite his love for cycling as a sport, the author does not overlook the parameter of sustainability. Cycling is perhaps the only "friendly" mode of transportation on this planet, and this means that in addition to a significant past, it will have an even greater future.

Signed by MARO VASILIADOU, in Kathimerini 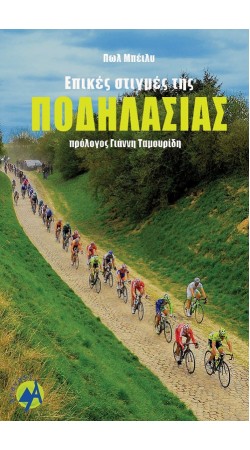