We were asked by the pefecture of Central Greece to draw a map for the artificial lake Krematon and on the back to write texts about the sights of the area and suggested routes. The map is distributed free of charge from the prefecture of Evritania. .

The artificial lake Krematon was created after the construction of the Krematon dam in 1965 by the waters of the rivers Acheloos, Agrafiotis, Tavropos and Trikeriotis. It has an area of ​​80.6 square meters. km and a capacity of 4,750,000,000 m³ of water and is the largest artificial lake in Greece.

The dam, built on a cliff in the Acheloos river, is 160 meters high and 457 meters wide, making it one of the largest dams in Europe with a volume of 8,130,000 m 8.. Its construction of soil and gravel, and not as usual, made of concrete, characterizes it as a Earth-fill dam.

It has a complex shoreline and turquoise waters, while in many places on the banks reedbeds are formed with densely emerging plants (eg Juncus, Phragmites australis, Typha spp.) and tamarisks (Tamarix spp.). On the shores, there are plane trees.

Excellent views of the lake can be enjoyed either near the Fidakia of Evritania or by Episkopi and Tripotamos. The picture is enchanting in any case. 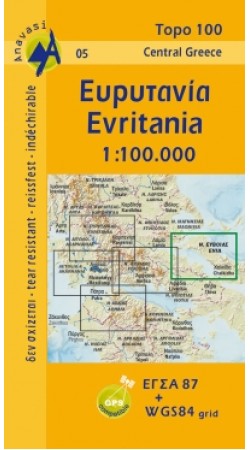 Out Of Stock
Evritania • Road map 1:100 000
Detailed road map on a scale of 1: 100000 for the area of Evritania. Evritania is completely covered by mountains, Timfrystos and Panaitolikos amon..
8.50€
Ex Tax:8.50€
Add to Cart
Add to Wish List
Quick buy Ask about