Agrafa (the Unwriten place) is an inhospitable sea of mountains, where people crossed the centuries thanks to the endurance of goats and the courage of their souls. In Agrafa mountains set the rules and people adjusted humbly. Their homes - always in small clusters - followed, like their footpaths, the commands of the relief. Nowhere else, in Greece, lifestyles that come from the depths of the ages and elements of the past are still so visible. It was isolation, the lack of roads and means, the difficulty of communicating with the outside world, that determined their fate. Agrafa mountains amazing to see and thrilling to climb. They are a key link in the chain of Pindus mountains. The Νorthern Agrafa comprise Mt Karavoula (1862 m.) Mt Karava (2186 m.), Mt Kazarma (1977 m.) and Mt Voutsikaki (2152 m.). South of Mt Voutsikaki, two parallel mountain ranges known as Agrafa mountains of Evritania, stretch on both sides of the river Agrafiotis. Highest peaks are Avgo or Delidimi (2163 m,), Fteri (2127 m.), Borlero (2017 m). and Svoni (2040 m.). The Agrafa mountains are craggy and visibly folded, eloquently reflecting the turbulent geological history of the Pindus mountain range. They consist of alternating limestone and flysch rocks, present on peaks and valleys respectively. All the routes are highlighted on our Map of Agrafa with scale 1:50.000

Discover the Southern Part through our Suggested Routes

A classic route in eastern Agrafa is the footpath between the village of Agrafa and Niala. Partly laid with stone, the path remains in good condition to this day. Starting from Agrafa, head up along the length of the canal to come out shortly onto a new forest road, which has thankfully left the path untouched. Much of the path until the saddle of Patimata is stone-laid and there is a very attractive fountain along the way. At the saddle (end of road from north) there is an iconostasis and water trough. From here head up the bare slopes and enter Niala by climbing the ridge at the site of the civil war memorial. 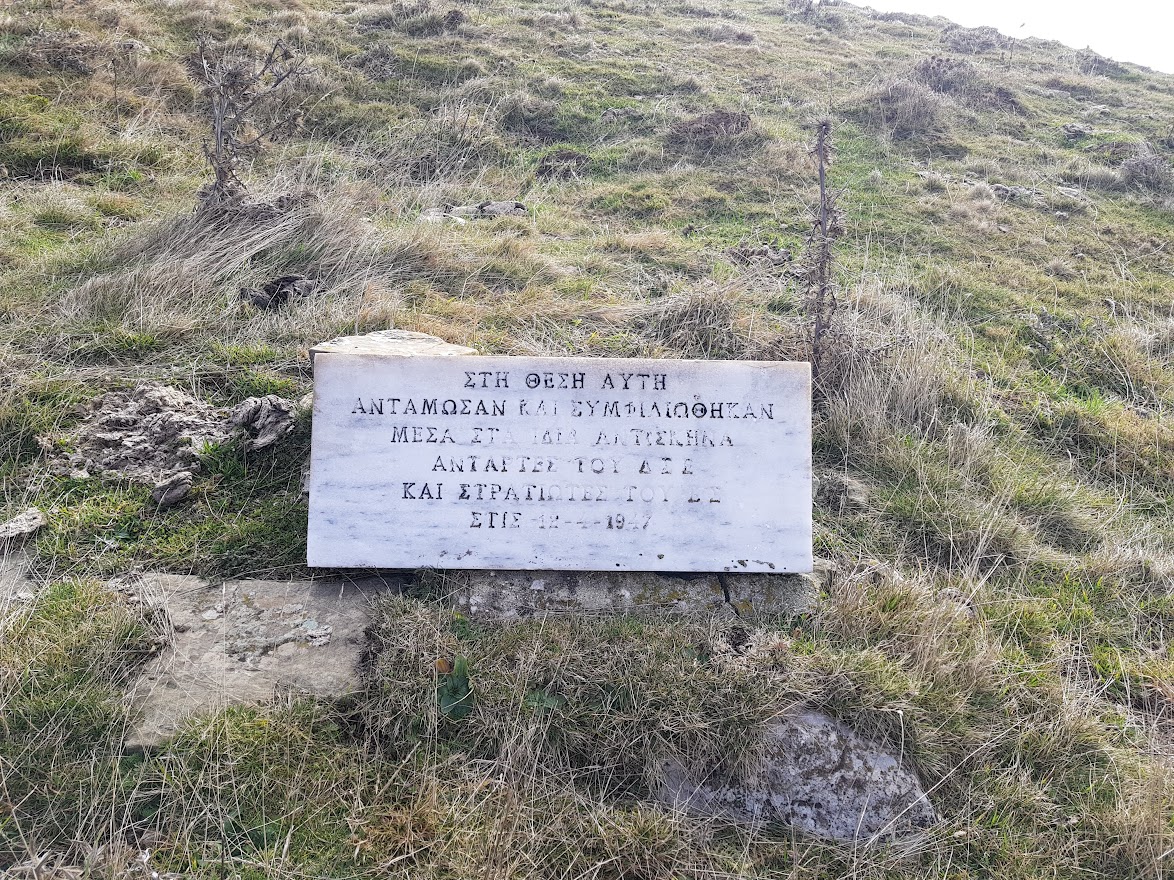 The trail starts off the road and its first section has been damaged by road works. Past this section continue along the river to Tripa Agrafioti, an impressive waterfall.

The path starts from Epiniana on a dirt road and meanders to reach the confluence of the Fteri stream with Agrafiotis, where the stone bridge of Anifora is located. Cross the bridge to Karvasara. Beware, you will cross two slippery points, probably caused by landlides. The trail continued until Monastiraki, but is now closed.

A beautiful route on an old paved path that connects Karvasaras to Marathos going through several small -now abandoned- settlements. It moves on the green slope above the Myrisiotis stream. With a slight detour on a uncertain trail we can visit the hidden waterfall. In the first part there is an exposed section caused after a landslide.

An easy route along a paved path parallel to the stream that connects Epianiana with the isolated settlement of Asprorema. A beautiful trail on steep slopes reminiscent of trekking in Nepal. At some points you have to take off your shoes to cross the stream.

In the heart of West Agrafa, the most secluded part of the mountain range is dominated by the fierce and three-headed Fteri. At an altitude of 2127m it is probably the most difficult peak of Agrafa. You can Climb to the top can from the north ridge starting from Epianiana. By dirt road (6 km on 4x4 track) we reach Mersia. From here we see its imposing east side as well as peak Kourouna. Following the livestock trail we reach the still-active Paloukia settlement. We continue on the slope of Pirgos that gradually becomes a rocky slope, Mavra Stefania, with technical sections up to grade II tto the top. We can reach the north ridge also from the village Vasilesi (Fousiana). Starting with a dirt road and then via a path we reach the crossing between Pirgos and Kastro where it joins the trail from Epianiana.The waymarkers on the ridge are sparse. You can also climb to the top from the south ridge via Pratina pass. Starting from the village of Lithochori and through a dirt road and unclear path we reach the living livestock settlement of Goupata. From there a clear livestock trail takes us to Pratina. Then follow the ridge that leads us first to the two spurs and finally to the peak. The southern ridge has exposed sections up to grade II.

A crossing of Eastern Agrafa. It starts from the village of Saïka and goes up to Svoni from the impressive and windy northern slope with has some exposed Grade I sections. Then through the ridge you’ll reach Niala and the memorial of the civil war. The path leaves the ridge and goes down to the church of Agios Nikolaos. From here it follows the beautiful green ridge Apellina, Voidolivado and as it approaches Michos it becomes rocky and steep on one side until Kastro from where it descends to the dirt road that leads us to Tria Sinora.

A spectacular climb to Delidimi via Aforismeni ridge. The route starts at Tria Sinora follows the ridge and past Kokkinolakkes peak continues towards Aforismeni. Gradually the ridge becomes steeper and narrower, there are some technical sections that can be bypassed from the left. While looking at Delidimi’s wild side which nevertheless gives us a way to climb to the top. From here going down to Soufli, we turn south and follow the path to the village of Asprorema and from there to Epianiana

Perhaps the most impressive crossing of Agrafa. Joins the imposing peaks, climbing ridges that highlight the wild and secluded side of this area. A demanding route with exposed and technical sections and impressive landscapes that will stay with you forever. The route starts at Tria Sinora and until Delidimi is the same as Route ADV1. From here continue west to Salagianni passing first through Soufli and Dichala. Then go south as the terrain becomes milder and through green slopes reach Baltenisi. The view from here is breathtaking. A sea of peaks extends everywhere with Fteri in the foreground and as you take your next step you engage in a two-kilometre ridge with a technical section at the beginning and then continuing on the windy ridge up to the col of Plaka. From here follow the path and through the northern slope reach Fteri. Head south towards Pratina and continue on the ridge to reach Loutsi and finally Liakoura, with some technical sections. Leave the ridge after Liakoura and descend to village Monastiraki.

Discover the Northern Part of Agrafa through our Suggested Routes

From Belokomitis village (bus stop) starts a downhill path to Karitsiotis stream. After crossing the stream, ascend to the small village of Zygogianneika (1h 30min). Continue steeply up to the wooden shelter Elatakos (1h 15min) (open, with bunk beds for 12 people and a woodstove - Information EOS Karditsas: 6974110853). In 15 min you reach Perdikovrysi fountain and exit the fir forest below the peak Petsalouda which you traverse from the left until Chouni pass. Shortly after you walk through “Portes Agrafon” a striking passage on the rocky ridge (1h from the shelter). Opposite is the cone of Borlero to which you head straight, initially on a smooth ridge through beech and fir forest, and then on the steep ground to the top (1h 15min). Descend towards the shepherds’ settlement of Elatos in a northerly direction until Katsantonis pass and then through fir forest (1h).

This beautiful route starts from the village of Anthiro. Follow a visible path through fir forest and cross the dirt road several times. At the edge of the dense forest, take the dirt road and come to a spring in 15 min. You can also get to this point from the forest resort “Dryades” following a waymarked path (K6). From the spring, bear northwest to the col where there is a splendid view of the Lake. Turn left and climb the ridge with caution to the top

Start at the sign on the main tarmac road of Belokomitis. The entire route runs through fir forest. Ascend to a clearing on Karagiannis ridge (45min) where the path from Neochori (30 min, well-marked B2) ends. Continue in a westerly direction bypassing several bumps up to the meadow where there is a church of Agia Paraskevi (20 min) and a spring. From there climb the forested slopes and in an hour come to the meadows of Koulia where the path from Kalyvia Pezoulas and Neraida (2h30min, waymarked B3) ends. A 30 min walk among tall and sparse fir trees brings us to the Agrafa shelter with a great view of the lake and the surrounding mountains.

A very nice crossing in open terrain; the first part is suited for beginners and offers endless panoramic views of Plastira lake and Agrafa mountains. Starting at Agrafa shelter head towards Templa ridge (1808 m.) climbing from the right (northern) side. Then walk on the smooth ridge of Petsalouda, descend to a col and re-ascend to peak Voutsikaki (1h 30min). From there continue on the northwestern ridge and after peak Gavel (2133m.) change direction and descend to the col. Bypass peak Paliomantri (1832 m.) from the left and ascend to Kazarma beside the dirt road. At the top there is an abandoned fire lookout tower (1h and 45min) . Turn westwards and descend towards Agios Nikolaos Vlasiou ( 45min). This route is aimed at fit mountaineers who want to make a day-long crossing.

The route starts from Kasandra fountain at Miliareika. Past Profitis Elias Fylaktis (1h 20min) follow apath and climb towards peak Koufolongos (1882 m), Bypass it from the left and descend to the saddle to its west. From there climb Kazarma peak (3h). Three more routes merge at Profitis Elias Fylaktis, all through fir forests, with springs. One from Agios Giannis Fylaktis waymarked B16 (1h 45min) and two more from Kryoneri: B17 which joins the path from Fylakti and B18 through Goumarila (2h 15min) . 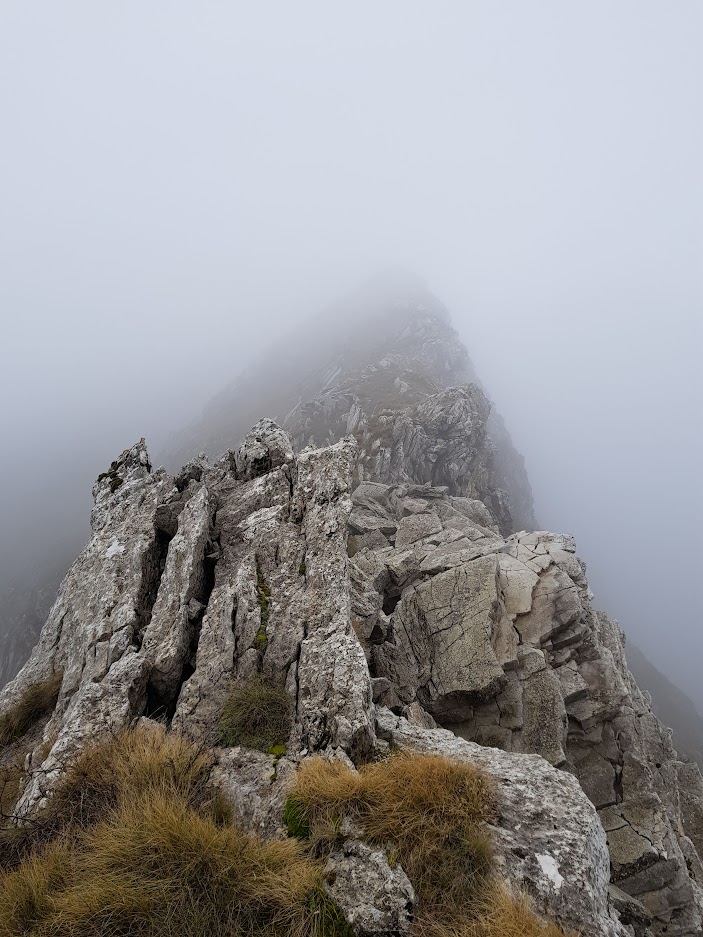 The path starts from the watermill of Anthohori (route B20). The well maintained and partly stone-laid path runs along the Anthochoritiko stream with beautiful waterfalls on the way. Cross from the left to the right bank on a concrete bridge and continue up to the highest waterfall. Further up the path crosses several times the stream, in the cool shade of pine, chestnut and plane trees, up to the stone bridge of Kamara. From this beautiful spot ascend to the meadows where 4the “Ennea Vryses” springs. Head on the stony slope to Kazarma where you meet the path coming from Voutsikaki (B4) and descend to Agios Nikolaos. Alternatively, from Kamara bridge there is an old paved path to Agios Nikolaos Vlasiou (2h) passing by Malli spring. This route (B21) is sparsely waymarked. A1 : Agios Nikolaos Vlasiou - Karava ( 2186m. ) (2h30min) Agios Nikolaos Vlasiou is a place where many trails merge and the starting point for the ascent to the highest peak of the Northern Agrafa range. The path runs parallel to a dirt road (on its right side) amongst fir trees. Cross to the left side of the road and walk through meadows and small hills with sparse beech trees. Meet again the road and move along its left side on rocky terrain. Leave the road again and traverse peak Koulkoutsari from the south to end up in a nice little plateau with a seasonal lake (1h 45min). From here ascend from the left (south) ridge to the summit with panoramic views of Argithea and the Northern Agrafa mountains (45min). There is an alternative descent, the A4 path to Vlasi via Makria Rachi ridge.